*Two veteran upstate NEW YORK on-air talents left us last week, at opposite ends of the I-88 corridor. 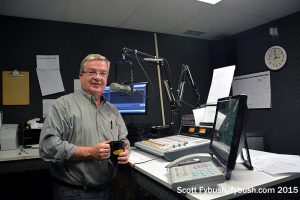 In Binghamton, Dana Potter was a rarity – a local who worked his entire career in his hometown. His love of broadcasting started in 1971 when he joined an Explorer post based at WNBF radio and TV, where he immediately got hooked on the medium. By age 20 in 1975, he was doing the overnight shift on WNBF radio, and for 47 years he was a fixture on the Southern Tier dial, working at WENE and WMRV and then at WLTB (Magic 101.7) since 1997.

Potter had been both operations manager for GM Broadcasting and the midday host on WLTB, part of a tight-knit locally-run operation there. In 2013, he was named a “Living Legend” by the Binghamton Broadcasters for his radio career and for his community involvement, including his support of the Handicapped Children’s Association.

In recent years, he’d been fighting cancer, a battle he lost on Friday. Potter was 67.

*In Albany, Bob Mason was a morning fixture from the 1980s into the mid-2000s, most prominently as half of the “Mason and Sheehan” morning show on WPYX (106.5) when the rock station was high atop the ratings.

A native of Catskill, Mason (born Roy Moon) claimed to have started in radio by building a pirate transmitter. By the late 1970s, he’d made it to Albany and WFLY (92.3), where he did afternoons until crossing over to WPYX in 1981. For the next decade and a half, alongside Cliff Nash and Bill Sheehan, Mason was one of the city’s biggest radio stars, provoking controversy and standing up for state workers.

Mason was hired away by Clear Channel in 1997 for the short-lived WXCR (102.3), later suing the company, claiming he was set up to fail so that Howard Stern could succeed on a sister station. After the lawsuit was settled, Mason worked in New Hampshire for a bit, returned to Albany for a run at Galaxy’s WRCZ (94.5), then retired in 2004, later working at a liquor store.