by Scott Fybush
in Free Content, New York, Tower Site of the Week
0

For three decades now, your editor and the editorial family have driven through Dunkirk, New York several times a year. It’s hard to avoid when you’re headed to Indiana from western New York – quite literally, all roads (by which we mean the New York Thruway) go through Dunkirk on the way to the Pennsylvania border and the unending open roads of Ohio and Indiana beyond that.

Look to the north just after you pass the Dunkirk/Fredonia exit and you’ll see the towers of the heritage AM station here in town. WDOE (1410) signed on in 1950 as WFCB, running 500 watts from a transmitter site that’s never moved in over 70 years.

That’s not to say things haven’t changed out here on Willow Road over the years. The current studio building dates to the 1980s or thereabouts. Out back, what had once been a three-tower AM array is now just two towers: one carrying WDOE as a nondirectional signal, the other remaining tower carrying STLs and an antenna for one of WDOE’s two translators, W268CX (101.5).

In 30 years of going past this building, we’ve only been inside twice; once, many years ago, with the whole family (even a previous family dog) on the way home from Indiana, and again for a second time on a quiet Saturday morning with our station-visiting buddy Mike Fitzpatrick of NECRAT.us.

This is a simple but elegant broadcast facility: walk in to the front lobby and you can see in to the talk studio that separates the two air studios, which both open into the station’s back hallway. There’s a business office behind the front desk and sales offices behind. That back hallway leads us to the studios for WDOE, with a full-service oldies format, and its FM sister WBKX (96.5 Fredonia), which does countr

Across the hallway from the studios, there’s a rack room that holds satellite receivers, automation computers and some older vintage gear, too.

Where are the transmitters? Out in a separate building, where there’s a row of transmitters (and a now obsolete phasor) for WDOE, studio-transmitter links to WBKX’s site, and the Nautel transmitter for the 101.5 WDOE translator that’s mounted on one former AM tower nearby.

Before we head up into the hills to see WBKX, we stop at the nearby SUNY Fredonia campus to get a look at the local college station. WCVF (88.9) has launched a lot of broadcast careers in western New York, and its antenna sits atop Maytum Hall, the tallest building on this otherwise low-slung campus. 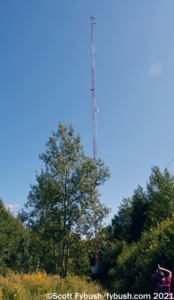 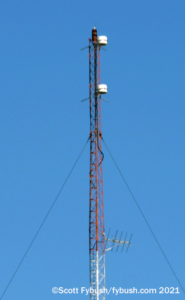 The Thruway separates two distinct parts of the terrain here: to the north, it’s the flat shoreline of Lake Erie, while the land rises sharply to the south into the hills that form the northern extent of the Appalachians.

WBKX’s tower sits up in those hills south of Brocton, up on Kelly Hill Road. There’s a simple block building here, a tower with the two-bay WBKX antenna, and below that the other WDOE translator. When we were there in 2021, it was on 94.9, but it has just recently changed frequency to escape interference from Canada; it’s now on 105.5 as W288EJ.

And don’t miss a big batch of where IDs next Wednesday, over at our sister site, TopHour.com!