by Scott Fybush
in Free Content, Indiana, Tower Site of the Week
2 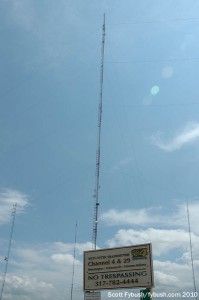 Why is the tallest structure in the state of Indiana located amidst corn fields 25 miles due south of downtown Indianapolis?

The answer to that question is at the heart of this week’s Site of the Week, and it takes us deep into the earliest history of Hoosier TV – as well as to a fascinating mid-afternoon stop on our way from Columbus (as profiled in last week’s installment) up to Indianapolis during that July 2010 in the company of Mike Fitzpatrick (from NECRAT.us) and Blaine Thompson (of Indiana Radio Watch).

The history, first: the very first TV station in Indiana was WFBM-TV (Channel 6) in Indianapolis, which signed on in May 1949. (It’s now WRTV, and we saw its transmitter in 2009 and profiled it on Site of the Week last year.)

But just a few months after WFBM-TV signed on, a second Indiana TV station took to the air in a much smaller community. WTTV (Channel 10) was the television counterpart to WTTS (1370) down in Bloomington, 55 miles or so southwest of Indianapolis, and its arrival made that college town one of the smallest TV cities in America.

Both WTTV and WTTS were owned by Sarkes Tarzian, an electronics entrepreneur who’d worked for Atwater Kent and RCA before striking out on his own in the mid-1940s. Tarzian designed and built much of the equipment for his stations, including his own microwave link to Cincinnati to bring in network programming from NBC and ABC. And within a few years, he’d figured out that Bloomington wasn’t big enough to sustain a TV station on its own – which is why WTTV moved to channel 4 in 1954 (clearing the way for channel 10 to be reassigned to Terre Haute, west of Indianapolis) and why channel 4 put up an 1132-foot tower here in Trafalgar, Indiana in 1957.

Trafalgar, as you may by now have suspected, is the closest spot to Indianapolis from which it’s also possible to still cover Bloomington with a city-grade signal, and in the years since WTTV arrived here, it’s become a tower farm that’s also home to other “Bloomington/Indianapolis” signals. (Indeed, of the four TV signals licensed to Bloomington, all but one uses the Trafalgar site.)

Once it had arrived in Trafalgar, WTTV settled in to a new life as an independent station (the networks were all claimed by Indianapolis’ own VHF signals), and for several decades it became a mini-superstation seen on cable across most of the state. Its location down here to the south of Indianapolis didn’t work out so well for over-the-air viewers as suburban growth sprawled out to the north, and in the 1980s it added a satellite station north of Indianapolis, WTTK (Channel 29), licensed to Kokomo but also operating from the WTTV studios on Bluff Road south of downtown Indy.

Today, WTTV/WTTK are CW affiliates, owned by Tribune and operating in tandem with Fox affiliate WXIN (Channel 59); indeed, it’s the WTTK signal that serves as the primary signal for most of Indianapolis, since it shares the WXIN antenna at the tower farm in northwest Indianapolis. Back here in Trafalgar, our 2010 visit found the former channel 4 analog transmitter still in place in the concrete-block transmitter building, facing the newer RF 48 digital transmitters.

WTTV gained an FM sister station in 1960, also operating from the Trafalgar tower: WTTS-FM (92.3) is also licensed to Bloomington, and it maintains its studios there as well as a sales office in downtown Indianapolis and a transmitter building just behind the WTTV building. (Unlike WTTV, which has been through several owners over the years, WTTS-FM is still owned by Sarkes Tarzian.)

Two more TV stations with tall towers sprouted from the corn fields here behind the WTTV site in the 1980s: WIIB (Channel 63) signed on in 1988 as a Home Shopping Network station and was briefly co-owned with WTTV (under Sinclair) before becoming the Indianapolis market’s Pax outlet in 1995 as WIPX-TV. (It even maintained offices and a master-control facility here at one time.)

The old channel 63 analog transmitter remained in place here, too, tucked in next to what’s now the RF 27 digital transmitter for WIPX-TV.

The 951-foot WIPX-TV tower (it’s the one just to the left of the big WTTV tower in the photo at the top right of the page) is also home to a newer noncommercial FM signal: WHZN (88.3 New Whiteland) signed on from here in 2009, broadcasting Christian contemporary music to the area south of Indianapolis. After our visit, “88.3 the Walk” was sold to Olivet Nazarene University, which also operates WONU up in Kankakee, Illinois, south of Chicago, becoming part of the “Shine FM” network based at WONU. (“The Walk” later reappeared at another signal in the region owned by Horizon Christian Fellowship; WWDL 91.3 Plainfield signed on in 2010 from a site west of Indianapolis and briefly simulcast with WHZN before WHZN was sold off.)

The other TV tower out here, just west of WIPX-TV (and to the right of WTTV in the group photo at the top right of the page), checks in at an even 1000 feet. Its side-mounted antenna belongs to the Indianapolis-market TBN religious outlet, WCLJ (Channel 42), and we didn’t get inside that building on our tour.

(WCLJ returned to its old analog channel, 42, after the digital transition; it had operated an interim DTV facility here on channel 56.)

There’s one more signal transmitting from Trafalgar, and it has by far the shortest tower.

Amidst the 1000-foot giants, the 151-foot tower for WFCI (89.5 Franklin) stands out along the entry road leading into the site from State Road 252.

Licensed to Franklin College in nearby Franklin, WFCI runs 1150 watts from this vertical-only antenna (protecting the old analog channel 6 WRTV signal), and these days most of its airtime is used to simulcast public station WFYI (90.1 Indianapolis), though Franklin College students are on the air at night and on weekends. And yes, that Gates transmitter – still WFCI’s main and only transmitter – is original to this site from more than 40 years back.

From Trafalgar, it’s an incredibly straight shot 25 miles north up State Route 135, which becomes South Meridian Street, into downtown Indianapolis – and that’s where we’ll continue this set of tours in next week’s installment.

Thanks to Rick Poling of WTTV and Charlie Sears, Trafalgar transmitter veteran, for the tours!

Check out our spring clearance specials on the world-famous Tower Site Calendar 2012, available from the all new Fybush.com store!

And don’t miss a big pile of Indianapolis IDs next Wednesday, over at our sister site, TopHour.com!