*After months without any games to talk about, sports radio and TV are suddenly awash in live action – and plenty of bizarre stories to cover surrounding the sudden return of not only Major League Baseball but also the oddities that are NHL hockey and NBA basketball in… wait, it’s August right now?

For play by play teams, it’s a lot of remote action: of the three major sports that are back in action, only baseball has its local announcers actually in the ballpark during games – mostly. It’s only home announcers allowed in the parks, with the regional sports networks providing “world feeds” of video that the road crews can call from back in their own cities. (photo: NESN.com)

And even at that, not everyone is in the park: due in part to Jerry Remy’s health conditions, NESN decided early on not to call Red Sox games from Fenway, instead using its studios in Watertown for both home games and road trips. Down the road in New York, the WFAN (101.9/660) broadcasts of Yankee games have been emanating from the Stadium during homestands, but for the last few days it’s been without the familiar voice of John Sterling, who’s been having what are described as non-COVID health issues that took him off the air. (Didn’t notice right away? That’s because Ricky Ricardo, who usually calls the Yankees’ Spanish-language radio broadcasts, shifted seamlessly into the English-language booth with an almost uncanny echo of Sterling’s cadences. If Ricardo doesn’t get serious consideration as an eventual replacement for the octogenarian Sterling, something’s wrong in radio-land.)

Some questions already have good answers: the use of fake crowd noise during broadcasts quickly went from a novelty to a relatively normal-sounding part of an anything-but-normal season. The fake fans who appear to be occupying the stands during Fox’s network broadcasts? That’s still weird, at least to us.

As for the Blue Jays, exiled from Canada to a last-second makeshift home in Buffalo’s Sahlen’s Stadium, their broadcasters are staying north of the border: Dan Shulman and Buck Martinez will call the TV games from the Sportsnet studio, while Mike Wilner and Ben Wagner will be in the CJCL (Sportsnet 590 the FAN) studio for their radio call. So far, no Buffalo affiliate has been announced for the radio network, and of course Sportsnet isn’t available on cable in the US, which means Buffalo fans will need to pay for MLB packages to watch or listen to their “home” team in this bizarre season.

How long will it all last? The Phillies were already sidelined by positive tests that forced games to be canceled last week, and if the whole season feels a little like it’s on borrowed time, you’re not alone. 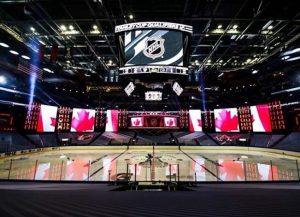 *If you’d told a sports radio program director last year that they’d need to be thinking about basketball and hockey conflicts in August, they’d have laughed at you – but at stations such as Boston’s Sports Hub, New York’s WFAN and WIP in Philadelphia, it’s a legitimate issue now that the NHL and NBA are both underway from their bubbles in Orlando, Toronto and Edmonton. (photo: Kevin Vahey)

Local NBA broadcasts are all being called remotely, using video feeds from ESPN in Orlando. The same is true of NHL radio and its regional sports networks’ TV coverage in the first round of playoffs, using feeds from a hard-working crew of broadcasters in the two Canadian bubble cities.

In Toronto, that’s an NBC crew imported from the U.S., undergoing a very strict quarantine regime before being allowed out of their hotel rooms into what’s still a restrictive bubble around the Scotiabank Arena, where the stands are now obscured by huge video screens that have essentially turned the place into a giant TV studio – which is exactly what it is for now.

Will it result in a bump in ratings for the sports media outlets that had been struggling to keep audiences listening and watching? So far, the answer appears to be yes – the early ratings showed viewers and listeners were eager to have live sports to watch.

(And we may as well write this one up right now for our eventual “2020 in Review” list of the year’s top stories, because this very unusual season is sure to be a memorable one for sports broadcasters around the country.)