*Rogers Media’s Thursday surprise for its listeners in CANADA‘s capital is still raising eyebrows a few days later, as we try to understand how it passes regulatory muster with the CRTC.

As we told you in a NERW extra on Thursday, Rogers’ three-way format flip killed its “Jack” adult hits brand, relocated its country station, and added an FM simulcast for its news-talk station – plus a new brand that might hint at bigger plans down the road in other markets. 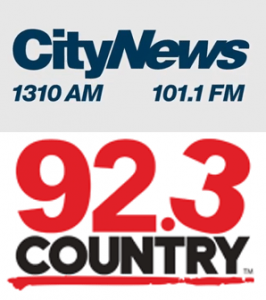 Jack had been on CJET (92.3) in Smiths Falls, south of Ottawa, since 2004, one of the last survivors of what had once been a big national brand for Rogers. Now the 92.3 signal is the new home of country, the format that had been up the dial on the bigger CKBY (101.1 Smiths Falls) signal since the last big shuffle of these facilities back in 2004.

As “101.1 Country” becomes “92.3 Country,” the 101.1 signal has flipped to a simulcast of CIWW (1310 Ottawa) – but it’s no longer “1310 News” for that hybrid news-talk format. Instead, Rogers has unveiled a new “CityNews” brand for the 1310/101.1 simulcast. It’s an interesting choice: Rogers’ CityTV national brand doesn’t have a local Ottawa outlet (though CITY-TV from Toronto is on cable and satellite there), making this a curious market to launch the brand, if in fact it’s something Rogers is planning to expand in other markets where it does have both news-talk radio and local CityTV newsrooms.

Before Rogers can bring “CityNews” to other markets, though, there are questions being asked about how it can do what it’s doing in Ottawa.

How can Rogers juggle an AM-FM simulcast and a total of four FMs, including top-40 “Kiss” CISS 105.3 and rock CHEZ 106? Because Smiths Falls is technically a separate market – an issue that’s cropped up in the past, two decades ago when 101.1 was CIOX and Rogers got slapped down by the CRTC for operating it out of its Ottawa studios as alt-rock “Xfm.”

The CRTC doesn’t generally allow AM-FM simulcasts within a market (except in loophole situations in some smaller markets where it’s allowed an FM “fill-in transmitter” to be attached to an AM license, a Canadian version of the AM-on-FM translators now common south of the border.) But if 101.1 is considered to be in a different market from Ottawa, it’s also not supposed to be simulcasting an Ottawa signal full-time – and it’s not supposed to be changing from a music format to a “specialty” news-talk format without the CRTC’s blessing.

Will Rogers’ Ottawa competitors cry foul? Bell might be the biggest rival at play here: its CKKL (Pure Country 94) wins, by virtue of Rogers moving its country format from 101.1 to the lesser 92.3 signal that’s not well heard in most of Ottawa. But Bell’s news-talker, CFRA (580), stands to be hurt by an AM-FM simulcast from Rogers’ CityNews.

We’ll be watching to see how this all plays out…stay tuned.