*When Sinclair engineers flipped the switch on the newest version of digital TV in western NEW YORK on Thursday, there probably weren’t more than a few dozen receivers in the Buffalo market capable of tuning in the ATSC 3.0 transmissions now emanating from the Grand Island transmitter site of WNYO-TV (Channel 49). 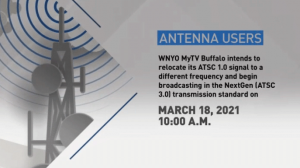 For those handful of early adopters, WNYO’s RF 16 signal is now providing a data stream with a higher bitrate than the existing ATSC 1 system (more than 25 mbps, compared to 19.39 mbps for ATSC 1), with more robust mobile reception capability and the potential for higher-definition video, enhanced audio quality and new interactive features. 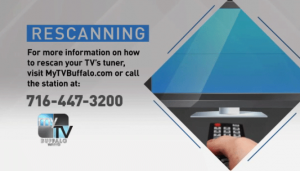 With a rescan, WNYO continues to be available to ATSC1 viewers, albeit with its subchannels spread across multiple RF signals: the main My service on 49.1 in ATSC1 is now a stream on WUTV’s transmitter, with 49.2/49.3/49.4 spread out over the WGRZ, WIVB and WKBW transmitters. (The “lighthouse” channel-sharing arrangement is intended to last at least five years, and it notably excludes a few of the existing players in the market, among them public broadcaster WNED and independent WBBZ.)

Large broadcast groups such as Sinclair are hoping the ATSC3 transition moves quickly once signals hit the air. They’re eager to get new revenue from datacasting, as well as to have more ATSC3 tuners hit the market in new TVs or in the form of adapter dongles that can be inexpensively added to existing sets. If that happens – and it’s a big “if” right now – more transmitters might flip to ATSC3 and eventually existing ATSC1 signals can be phased out, or relegated to one “lighthouse” transmitter carrying multiple channels.

First, though, the new system has to get on the air in more markets, and that will take a while. Sinclair is getting ready to launch ATSC3 in Syracuse next, with its NBC affiliate WSTM hosting the ATSC3 signal in partnership with its CBS outlet, WTVH, and Nexstar’s ABC outlet, WSYR-TV.

Pittsburgh was an early pilot market last year (Sinclair’s WPGH and WPMY and Hearst’s WTAE), followed by Springfield (Nexstar’s WWLP) – but after that it’s likely to be into 2022 before more NERW-land markets have access to ATSC3 transmissions. Boston, New York, Philadelphia, Hartford, Burlington and Rochester are all shown as “target markets” on the official ATSC3 map, but the process of actually arranging the channel sharing and lighthouse services and getting the system on the air will take some time. And of course there’s no guarantee consumers will be sufficiently enticed by ATSC3’s promises to invest in new equipment, or that other broadcasters (especially public outlets largely shut out of the Sinclair-led alliances) will be as quick to start up with the new system.