*Here in western NEW YORK, we’re not accustomed to being in the national spotlight quite this much and this often. Two massive winter storms, a supermarket shooting, and then Damar Hamlin’s terrifying on-field collapse a week ago in Cincinnati – it’s been a lot for the people of Buffalo and vicinity these last few months. 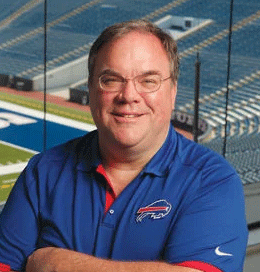 Listeners to WGR (550) and the Bills Radio Network may have noticed something else last week in Cincinnati: longtime Bills radio voice John Murphy wasn’t in the booth. The Bills initially said Chris Brown would be handling the call because Murphy was “under the weather,” but later in the week announced that he had in fact suffered a stroke the weekend before the game.

Murphy, 67, has been the Bills’ primary announcer since 2003. The team says he’s “recovering at home with his family and making progress every day.”

He also missed Sunday’s game against New England, with Brown again filling in for him on game coverage and on WGR’s “One Bills Live” show.