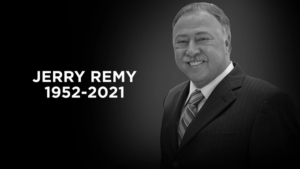 Remy died Saturday, a week short of what would have been his 69th birthday, ending a long fight that included seven rounds of treatment for lung cancer over the past 13 years.

The Fall River native began his baseball career with the California Angels organization in the early 1970s, but he made his mark playing second base for the Red Sox after being traded in 1978. A knee injury in 1985 ended his playing career, but he was just getting started as a Sox icon: in 1988, he joined the broadcast team (then split between NESN and WSBK-TV), where he became one of the team’s most enduring on-air voices. After learning baseball broadcast skills from Ned Martin, Remy’s partners over the years included Sean McDonough (who gave him his “RemDawg” nickname) and, perhaps most memorably, a long pairing with Don Orsillo.

Even during his health struggles, Remy kept coming back as often as he was able; after being short of breath during a game in June, he spent several days in the hospital but then returned to the broadcasts later in the month, working games into August before his health worsened again and he left the booth for the last time.

Remy’s career hit other struggles as well, including the 2013 incident in which his son, Jared Remy, fatally stabbed his fiancee, a crime that sent him to prison for life and took Remy off the air for the rest of the season amid questions about how the younger Remy was able to get a security job with the Sox. Remy wrote openly about that, as well as his battle with depression, in a 2019 memoir, “If These Walls Could Talk.”

To most Sox fans, though, the elder Remy remained the colorful “RemDawg,” honored in 2006 with induction into the Red Sox Hall of Fame and in 2017 to the Massachusetts Broadcasters Hall of Fame. Remy leveraged that fame into business deals as well, selling memorabilia and lending his name to several restaurants. (The flagship “Jerry Remy’s” just south of Fenway Park at 1265 Boylston Street had another broadcast connection – it occupied the space that had been home to WBCN for several decades.)

As the honorary president of Red Sox Nation, Remy became an icon during the team’s transformation from perpetual underdogs to four-time 21st-century champions, and his voice will always be one of the distinctive sounds of that era.

Memorials were starting to be announced over the weekend, including a tribute from NESN, which reaired Remy’s first 1988 Sox broadcast last night and will do so again tonight. Its announcers will wear “2” pins (Remy’s number on the team) during Thursday’s Bruins game, which will also feature a Remy tribute.