*What’s in the water in greater Toronto this week? At almost every major broadcast group, there are changes hitting morning shows – and in the case of one group, another round of even deeper cuts.

That’s Bell Media, yet again, where last week’s cuts included veteran CFRB (Newstalk 1010) program director Mike Bendixen. He’d been with the station for 23 years, and had been PD since 2009. Bell’s not confirming details of any of the cuts, but Broadcast Dialogue reports the job losses also include Greg MacDonald, who was the regional creative and production director for Bell’s radio and TV stations in southwestern Ontario, production manager Jeff Kirkwood and Damon Papadopulos, a writer at the Hamilton cluster.

In Toronto, Jeff MacDonald will reportedly take over as CFRB’s program director, adding those duties to his work at TSN 1050, Bell’s sports station. He’s been busy over there with a new lineup that launched Nov. 12, including the new “First Up” morning show with Carlo Colaiacovo and Aaron Korolnek, new “Leafs Lunch” hosts Julia Tocheri and Michael DiStefano, and a new early afternoon show, “Game Play,” hosted by Matthew Cauz and covering sports betting and fantasy sports.

The new TSN lineup competes against Rogers’ restructuring of its CJCL (Sportsnet 590 the FAN), which recently launched its own new schedule of flexible dayparts and hosts depending on which teams are in season and making news.

Meanwhile at Rogers, they’re counting down to next Monday’s splashy launch of a new morning show on CHFI (98.1), where guest hosts have been filling in since Maureen Holloway’s departure at the start of October. The big AC station is making an event out of the announcement, holding a contest giving listeners the chance to stay overnight at the hotel where it will be breaking the news the next morning. Spoiler alert, though it’s not much of a spoiler: the Toronto media rumor mill is pretty certain the new morning team will turn out to be the former CP24 TV morning team of Pooja Handa and Gureep Ahluwalia, who will be new to radio but developed a following for the very morning-radio-like banter they shared for years on the cable news channel. 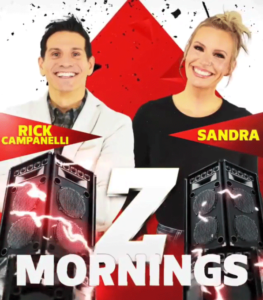 There’s also a new morning show starting today at Evanov’s top-40 “Z103.5” (CIDC), where Pina Sama and station veteran Tony Monaco had been the most recent wakeup crew. Monaco remains part of the Z103.5 lineup, now doing weekend night mix shows, but Sama is gone from the station’s website. In their place, midday host Sandra Crofford is pairing up with “ET Canada” host and former MuchMusic VJ Rick Campanelli for the new show. (There’s no word yet on who’s moving into middays.)