*NEW YORK‘s public TV station, WNET (Channel 13), is branching into radio at the far end of its service area.

It’s entering into a public service operating agreement with Peconic Public Broadcasting, which runs WPPB (88.3 Southampton) on the East End of Long Island, and it’s planning to buy the station outright for about $944,000.

For the nearly sixty years it’s been around, WNET has been strictly a TV operator, though it’s branched out from its New Jersey and New York City roots by acquiring Long Island’s WLIW (Channel 21). But while WNET and WLIW can be seen throughout the entire New York TV market, most of which is served by New York public radio behemoth WNYC, the WPPB radio signal is limited to just eastern Suffolk County and some adjacent parts of the Connecticut shoreline.

It’s been a challenge for everyone who’s tried to operate the station; for many years, it was run by Long Island University as WPBX and WLIU before the independent Peconic group took over in 2010.

As WNET will likely find out, public radio can be a hard sell in resort areas; despite reaching out to some of the wealthy celebrities who make their summer homes in the Hamptons, WPPB has struggled with its finances from time to time. The year-round population in the region is small, with the added challenge of strong relay transmitters that serve the area from Connecticut-based WNPR and WSHU also fighting for listener and underwriter dollars. And operating radio poses different challenges from operating TV, too – is WNET ready to be local for what’s essentially a small market on the East End?

*At the extreme opposite end of the state, there are some big changes this morning in morning drive at Buffalo’s WECK (1230/102.9/100.5). After veteran Buffalo talent Roger Christian lost his longtime job at WTSS (Star 102.5) a few months ago, he signed on with Buddy Shula at WECK, where it was pretty much a given he would be doing more than just weekends, fill-ins and live appearances.

Sure enough, Christian moves into the morning drive slot today, where he replaces a morning cast that’s been in motion since Shula took over at WECK. Tom Donahue had been the fixed star in mornings there, long predating Shula’s ownership, but he’s out of that slot after more than a decade. So is Gail Ann Huber, who came on board more recently as Donahue’s sidekick – and so is Tony Magoo, who was doing news remotely from his home in the Carolinas. Magoo has already landed a new remote news job, starting today on WGWE (105.9), the Seneca Nation station south of Buffalo, and Shula says Donahue and Huber will continue to have some sort of affiliation with WECK.

It’s also not clear what becomes of Danny Neaverth, the Buffalo radio legend who’d been part of the Monday edition of the morning show.

*Looking for an engineering gig here in Rochester? There are openings at iHeart’s local cluster – two big ones, in fact, thanks to the coincidental retirement on Friday of the two veteran engineers there. Randy Orbaker had been the chief engineer at the old WNYR/WEZO for many years before taking the helm at the cluster that eventually became iHeart; his assistant Joe Kochmanski also had many years at WHAM and its sister stations, and we wish them both all the best in their retirement.

We don’t write nearly enough about Rochester’s jazz station, WGMC (90.1 Greece), but there’s something very cool coming there next spring.

The inaugural season of “Jazz 90.1 University” will feature presentations from station staffers Derrick Lucas and Otto Bruno on topics such as “The History of Jazz in Rochester,” “Sinatra’s Capitol Years” and “Fitzgerald vs. Holiday,” all presented at the station’s studios. Tickets for the series go on sale Nov. 4, with a discount for members.

*When Cumulus sold a batch of stations to EMF earlier this year, only one format survived the sale: in Syracuse, the “Rebel” rock format that had been heard on WXTL (105.9) kept on going as a streaming-only service after 105.9’s terrestrial signal flipped to K-Love under its new ownership.

Credit PD Dave Frisina for pushing hard to keep Rebel rocking in its new digital form at TheRebelRocks.com – and it appears to be a success, because in addition to Frisina’s weekend labor of love, the Sunday midday “Soulshine” AAA show that he’s continued to do on the stream, Rebel is now adding more airstaff back into its mix. Next Monday, Frisina will return to afternoons, joined by Misse Thomas in middays (9 AM-2 PM) and Marty Santy on the 6-10 PM shift. Mornings, which had been the domain of the syndicated Bob & Tom when Rebel was on FM, will remain jockless for now.

*In Watertown, Alan Walts retired last week, ending a 44-year broadcast career that’s been split between the North Country and Florida. For the last 10 years, Walts has held down mornings at WTNY (790), a job he departed in a farewell broadcast on his birthday last Monday. It’s not clear who’s replaced him there – remarkably, WTNY appears to have no web or social media presence these days. 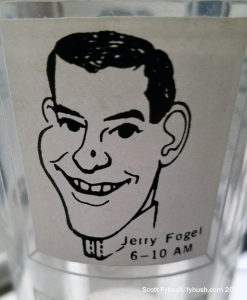 *In Rochester, Jerry Fogel was still fondly remembered for his days as a star top-40 morning DJ on WBBF (950) back in the 1960s, long after the rest of the world knew him as an actor on “The Mothers-in-Law” and “The White Shadow.” The Rochester native left WBBF in 1966 to follow his dreams to Hollywood, and eventually settled in Kansas City after his TV and movie career slowed down.

Fogel, who died last Monday in Kansas City, was the middle link in a three-generation radio family – his father, Morris Fogel, hosted an early Jewish radio show in Rochester and his son, Dave Fogel, does mornings at WLS-FM in Chicago. Fogel was 83.

Lou Palmer, who died Oct. 18 in Florida, was also 83 – and while he’s perhaps best recalled as one of the original SportsCenter anchors in the early years of ESPN, he had a long radio career at stations that included WJLK in Asbury Park, NJ; WTIC in Hartford and WFAN in New York, where he was part of the staff when the station launched in 1987. 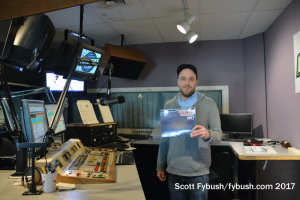 *Radio People on the Move in CONNECTICUT: Adam Rivers, one of New England radio’s homegrown good guys, gets a big move up to become PD of iHeart’s New Haven cluster. That’s where he’s been since 2013, serving as APD/MD and afternoon jock at WKCI (KC101) and programming “100.9 the Beat” (WKCI-HD2).

In addition to WKCI (which had been programmed from Hartford by Jagger at sister station WKSS) and the Beat, Rivers will now also oversee programming on talker WELI (960) and sports WAVZ (1300).

*Down the road in Milford, it’s a busy time at Connoisseur’s cluster as WEBE (107.9) and WICC (600) prepare to make their move out of their longtime downtown Bridgeport studios, joining their new sister stations WFOX, WPLR and WEZN. Jay Michaels won’t be making that move; he’s leaving WEBE’s afternoon shift as of this week. Allan Lamberti, who’d been doing mornings on WFOX, moves to afternoons on WEBE, while Charlie Padgett gets the morning show on WFOX.

*In an otherwise quiet week in eastern MASSACHUSETTS, our lead story goes to Beasley’s WBQT (96.9), which has long had a distinctive HD2 format, playing Irish and Irish-influenced music in that most Irish of American cities. Not anymore, though: as of last week, it’s gone to current hip-hop and R&B as “Power 96.9,” apparently to drive another wedge into an urban format battle against iHeart’s WJMN (94.5) and WKAF (97.7).

Where are they now, by the way? Former WKAF PD Chris Malone is now working with MusicMaster Scheduling.

*On the AM dial, there’s a new lease tenant on Multicultural’s WAZN (1470 Watertown): Spanish-language Radio Poder is now being heard there from 10 AM until midnight daily.

*In MAINE, Kwame Dankwa joins the Townsquare Portland team as the new brand manager/afternoon guy at WJBQ (97.9). Dankwa’s New England experience includes time in the PD chair in VERMONT at WZRT in Rutland; more recently, he’s been programming WRTS (Star 103.7) in Erie, PENNSYLVANIA. At WJBQ, Dankwa will take over from AJ Dukette, who’s been juggling the top 40 station along with programming duties for the rest of that cluster.

Meanwhile in Erie, Chuck Stevens wrapped up a 51-year radio career with his departure Friday as operations manager of the Cumulus cluster there. Stevens, who was also doing afternoons at WXKC (99.9), had been with the Cumulus stations since 2012; before that, he’d been GM of Renda’s Punxsutawney stations, PD of WLTJ in Pittsburgh, and had made multiple stops in Buffalo, including a run as PD of WJYE there. 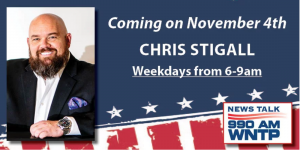 *It’s licensed to Salem, NEW JERSEY, but WFAI (1510) serves the Wilmington, Delaware market across the Delaware River. Under new owner Forever Media, WFAI has just flipped to adult R&B as “Jammin 96.9,” with new calls WVJJ and a new translator in Delaware, W245CJ (96.9 Wilmington). For the rest of the year, WVJJ will carry the Tom Joyner Morning Show until it ends its syndication run.

*In CANADA, Maritime Broadcasting System is proposing another big signal reduction at one of its remaining AM stations. This time it’s CFBC (930) in Saint John, New Brunswick, which currently uses four towers for 50,000 watts day and night.

If it’s granted, CFBC will drop down to non-directional operation, using just 2000 watts by day and 150 watts at night. (Reports indicate that since suffering transmitter damage more than a decade ago, CFBC hasn’t been running anything close to its licensed 50 kW power anyway.)

*Meanwhile in Quebec, the CRTC has approved Michel Lambert’s application for a new French AC-oldies station on 88.7 in Saint-Raymond de Portneuf, northwest of Quebec City. Canadian Radio News reports the new station, with 12 kW/138 m, will use the calls CHOC.